The ongoing siege in the Philippines highlights the region’s deeper counterterrorism problems.

Amidst the breakdown of diplomacy in the Philippines, an insurgency by ISIS-affiliated extremist groups is highlighting the threat posed by terrorism and the Islamic State in South East Asia

Since May 23, the Philippines has endured violent conflict in Lanao del Sur province, part of the southern-most region of Mindanao. The province’s capital, Marawi, was besieged as part of a coordinated assault by the Armed Forces of the Philippines (AFP) and the Philippine National Police. Government forces sought to apprehend leading members of militant groups operating in Mindanao, specifically those of the ISIS-affiliated Islamic State of Lanao (Maute), Omar and Abdullah Maute, and Isnilon Hapilon of Abu Sayyaf Group (ASG).

Since fighting broke out, nearly 400 militants and 100 Philippine troops have been killed and a further 500 government forces have been wounded. In addition, 180,000 civilians have been evacuated and another 84,760 displaced; official civilian casualties are approaching 100 but this number is expected to rise dramatically.

As of June 26, AFP Public Affairs Chief Lt. Gen. Edgard Arevalo reported that the military has reason to believe ASG leader Isnilon Hapilon—purportedly the ‘emir’ of Islamic State in the Philippines—may no longer be in Marawi. With broader reports of AFP forces prevailing in overall terms, this specific instance of fighting is not likely to last much longer. However, within the context of the much more entrenched conflict in Mindanao, skirmishes such as these will diminish the prospects for reconciliation significantly. 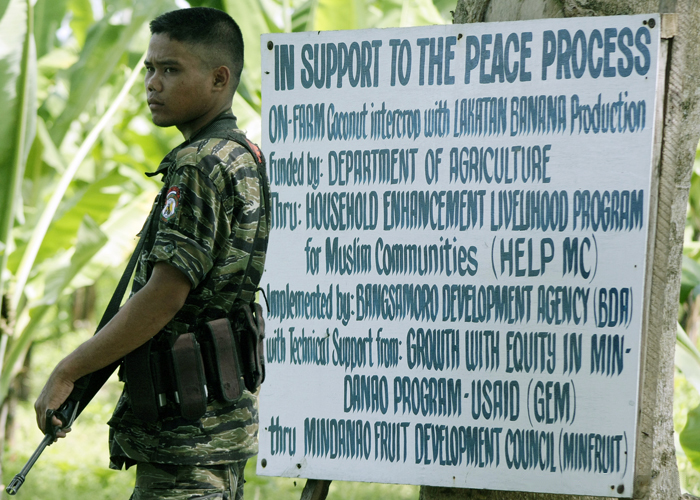 The present conflict in Mindanao has its roots in the ongoing insurgency by the minority Muslim population of the southern Philippines against various instances of foreign occupation. Since the days of Spanish colonialism, nationalist movements have sought to affirm the independence of the native Moro Muslim population to no avail. More recently, efforts by the Moro National Liberation Front (MNLF) have attempted to quell violent resistance and instead establish an autonomous regional government for Mindanao within Filipino jurisdiction.

In response, the Philippine military this year undertook action intended to apprehend prominent members of these militant elements and so prevent further interference in the peace process. The fierce opposition encountered thus far has been wholly unexpected however and as such has accounted—in combination with a lackluster military effort—for the extended duration of the siege.

A FAILURE TO COOPERATE? Mindanao, the Sulu archipelago, and other areas of the southern Philippines have long been regarded as a sanctuary for a host of would-be transnational criminal organisations. From the notorious al-Qaeda linked Jemaah Islamiyah (JI) group, and now various ISIS-affiliated militants, the extent to which these groups have undermined the Duterte government’s authority highlights the broader threat posed by the region’s relative lawlessness.

As Singaporean Defence Minister Dr Ng Eng Hen stated at the recent Shangri-La Dialogue, if the situation “was allowed to even escalate or entrench it would pose decades of problems for ASEAN cities and interests of other countries within ASEAN”. With the influx of foreign fighters returning from training and combat in Syria and Iraq, the likelihood that this recent outbreak of violence could be the beginning of just such a threat represents a very real cause for concern.

There are also fears that these events may inspire similar movements elsewhere in the region. The northern-Sumatran province of Aceh in Indonesia has been a prominent focus in recent years as it is home to training camps, several extremist groups, and some of the militants fighting in Marawi. It could become another potential flashpoint. Puzzlingly, despite an effort by President Joko Widodo to ban radical Islamist groups, joining ISIS is not seen as breaking the law in Indonesia until the person carries out an attack in Indonesia (as clarified by Muhammad Arif, a researcher at Jakarta-based think-tank THC ASEAN).

Yet regardless of the apparent threat, there has been little in the way of real engagement by ASEAN. Manila has had to look further afield, engaging current US-China dynamics to gain even cursory assistance. President Duterte begrudgingly accepted security and training assistance from US Special Forces and the Australian Air Force in the areas of intelligence, surveillance and reconnaissance. In response, China provided AUD$387,000 in aid donations and shipments of AUD$15.2m worth of Chinese-made assault and sniper rifles and ammunition, free of charge, due to its “shared commitment towards sustainable peace in the region”. While helpful, realistically these measures have provided little in the way of harm minimisation and the prevention of future conflict. The siege might have been avoided with greater multilateral engagement; the politicisation of the conflict has only marginally benefited the situation on the ground.

These issues, among others, illustrate the difficulties posed by ASEAN’s unique framework that, while facilitating dialogue, predominantly prioritises members’ right to self-determination. Cooperation between the Philippines and Indonesia to jointly patrol the Celebes Sea south of Mindanao in an effort to apprehend fleeing militants represent a constructive outcome since fighting began. Similarly, there have been consultations between Indonesia, Singapore, and Malaysia to resolve the ‘hot pursuit’ issue preventing navy boats from pursuing pirates who flee into neighbours’ waters. Yet in the wake of these events, the Philippines’ lacklustre effort to unilaterally establish an Interagency Border Security Council to assess border security and promote recommendations highlights the necessity of inter-regional cooperation.

Loopholes within ASEAN, including existing networks of closely integrated movements of people, porous borders, and an apparent deficit of security capabilities, continue to facilitate the undertaking of a vast array of lucrative criminal activities. The threat to ASEAN is salient. With controversy over conflicting claims and patrols in the South China Sea, whether there exists the capacity for a multilateral effort to overcome these dangers remains to be seen. If not, the growing capabilities of emerging extremist networks will enable the conditions for further conflict, increased instability, and the pre-eminence of terrorism in South East Asia for many years to come.