Venezuela: on the path to authoritarian rule under Maduro

It was once Latin America’s richest country. Now Venezuelans are running low on food – and patience.

While President Maduro trades blame for his country’s economic and political woes with President Trump, the crisis of his own making edges closer to civil conflict.

– Millions of Venezuelans lack adequate access to food and medicine, putting pressure on neighbouring Colombia as it absorbs migrants and refugees
– President Maduro is continuing to consolidate power
– The opposition has been unable to capitalise on mass protests due to infighting and repression
– Government threats against civilians may lead the country into civil war

Venezuela’s economic crisis is tightly bound to the fluctuations of the country’s major commodity: oil. During former President Hugo Chavez’s 14-year rule, the government was domestically praised for investments in education, food provisions, and health care, and Venezuela’s poverty rate halved from 50% to 26% between 1999 and 2011. The associated social spending outlays were supported by oil export profits—which account for 95% of Venezuela’s total export profit—and backed by the country’s significant oil reserves, estimated to be the largest in the world.

Government spending on speculated profits and an unwillingness to build a surplus exposed an economic dependency on state oil company Petroleos de Venezuela (PDVSA). After the global price of oil dropped 40% in the second half of 2014, the Venezuelan economy contracted 3.9%, 6.2%, 18%, and 7.2% in successive years. The PDVSA recorded a near 90% decrease in net profit, which collapsed from $7.3 billion in 2015 to $828 million in 2017. Without oil revenue, President Nicholas Maduro’s government could not sustain the Chavista-era social policies.

Maduro’s inability to diversify investments and unwillingness to formulate a budget surplus set the conditions for a humanitarian crisis. Close to 82% of Venezuelans now live below the poverty line. Unemployment has swelled to 25% and inflation is running close to 800%; it is set to reach 2000% by early 2018. In May 2016, a sugar shortage exposed the absence of affordable basic foodstuffs, and a lack of hard currency means 75% of Venezuelans now follow the ‘Maduro diet’, losing on average 8.6 kilograms due to food scarcity since 2015.

The government’s reluctance to accept international humanitarian aid has seen opportunistic citizens turn to crime to provide for themselves, or resort to crossing the border to seek necessities and political refuge. Colombian President Juan Manuel Santos has offered temporary housing and social services for 150,000 Venezuelans, as up to 25,000 Venezuelans cross the border daily.

ARBITRARY VIOLENCE AND POWER TAKES OVER Rising urban crime rates and reprisal attacks have made Venezuela’s capital, Caracas, the most dangerous city in the world, with a recorded 140 murders per 100,000 people in 2016. A further 120 people have died in protests directed against Maduro’s political and economic decisions. Many civilian deaths have been blamed on ‘colectivos’, armed gangs that impose curfews in Caracas and run unofficial checkpoints for drivers, much of which is reportedly government-supported.

To curtail the crisis, Maduro has tried to seize legislative powers from parliament, where the opposition holds 112 of 167 seats. But Maduro’s first attempt in April 2017 was blocked, amid accusations that he was trying to establish a dictatorship.

July and August 2017 marked a watershed in Maduro’s presidency. Unhappy with April’s drama, Maduro held a binding vote in August to elect a new legislative body, the National Constituent Assembly (NCA), to be tasked with changing the constitution. Officially, 8 million people voted, but observers suggest the true figure was just 2.5 million—half the number who voted in an unofficial ballot organised by the opposition weeks earlier in protest of Maduro’s plans. Many government workers were forced to vote for the NCA or face job termination, a fateful choice given the 25% unemployment rate and food shortages.

Maduro has also ordered the home detention of opposition figures Antonio Ledezma and Leopoldo Lopez, and Chief Prosecutor Luisa Ortega Diaz (a lone Maduro critic within government) has been forced from office by an entourage of armed soldiers. Her replacement, Tarek William Saab, is a Maduro sympathiser criticised by the UN for not preventing human rights abuses in his previous role as the country’s Human Rights Ombudsman.

Corruption and cronyism drive the Venezuelan establishment’s support for a dictatorship. The country’s top officials, including defence chiefs, enjoy an official exchange rate of 10 Bolivars Fuertes to the US Dollar, while the population spend up to 20,000 Bolivars to the US Dollar on the black market. This corrupt practice provides its beneficiaries with significant economic leverage. Conversely, Venezuela’s monthly minimum wage of 97,531 Bolivars combined with a government food voucher worth 153,000 Bolivar have left many citizens earning less than $25 a month. The widespread corruption, prevailing economic conditions and growing reliance on patronage networks for survival have enabled Maduro to consolidate his authority despite mass protests against his rule.

WHAT NEXT FOR MADURO? 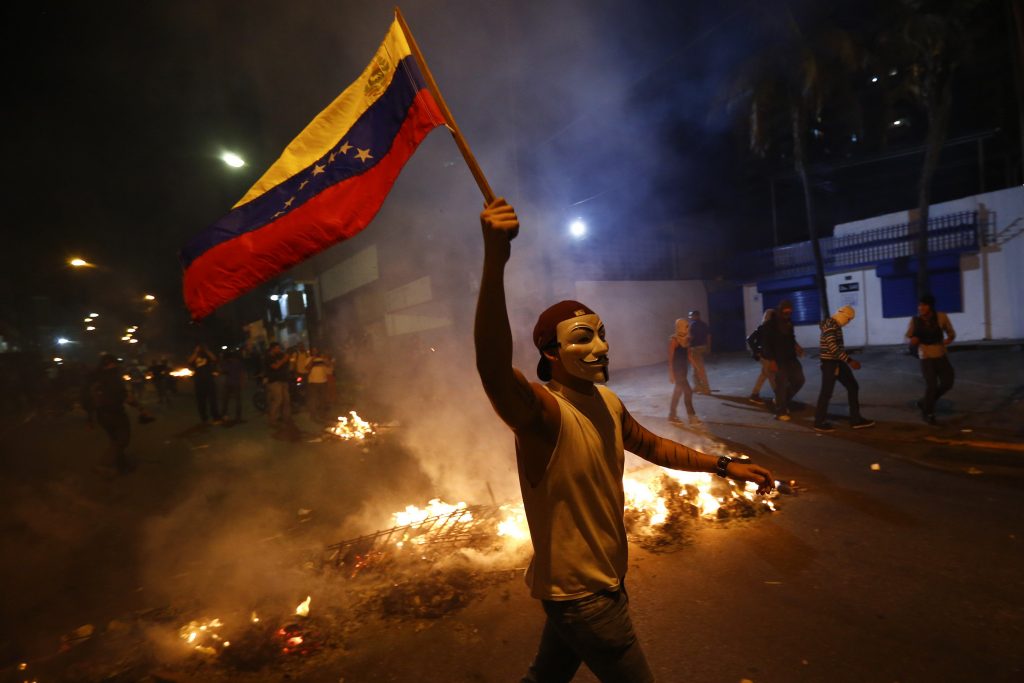 Maduro’s explanation for the crisis is that foreign enemies (namely the US) are engaged in an economic war against Venezuela, to weaken the country and gain control of its oil reserves. The Trump administration’s decision to apply sanction debt deals with the Venezuelan government or PDVSA have strengthened Maduro’s propaganda hand, as would an embargo on Venezuelan oil that is reportedly being considered—8% of US oil imports come from Venezuela, but 40% of Venezuela’s oil exports go to the US.

Support from political and military allies Bolivia, Cuba, Russia, and the Brazilian Worker’s Party are fuelling Maduro’s ideological rhetoric. Maduro has claimed he will remove the US dollar from official exchange rates and underpin the Bolivar with a basket of currency; oil prices were published in Chinese yuan this week for the first time. Such a move may perpetuate economic problems, particularly as the country’s foreign reserves are due to run out at the end of 2017, leaving it at risk of defaulting on its debts. However, a US oil embargo could see Venezuela offer oil at below market prices to countries like Russia and China, potentially staving off this outcome.

Venezuela’s 15 opposition parties have been unable to develop a common agreement or a shared vision regarding the future of the economy, or even find a negotiating position to approach Maduro. This infighting has rendered them incapable of capitalising on the ongoing civilian protests, which have drawn in hundreds of thousands at their peak. Meanwhile the detention of opposition leaders demonstrates the administration’s unwillingness to provide any political space for cooperation.

While most Venezuelans still support the policies of Chavez, they don’t want Maduro. As the economic crisis shows few signs of abating, his options are becomingly increasingly limited: change the economic status quo to regain favour, compromise with the opposition or silence his opponents. With the two former options looking increasingly less likely, conflict seems to be simmering.

Though the military appears to remain unified behind the president, there have been two failed coup attempts in recent months. Concurrently, protest numbers have dwindled, and disillusionment among the remaining demonstrators may lead to radicalisation and an attempt to end the crisis by force. The outcome of such a confrontation is uncertain and Maduro may survive if he oversees a bloodier crackdown of the opposition. Should Maduro be removed, it is unclear who would take the reins: a former confidant, or one of the many opposition leaders. Most difficult is recognising which option would improve the country.

Regardless, whoever is prepared to lead faces a daunting task of restoring the economy and healing deep societal divisions.