Troubled waters: Australia and China in the Pacific – Australia’s relations with the Pacific are deeply rooted in colonial history and based on a system of reliance and dependency which has continued into the present day.
– China has emerged as a power in the Pacific, exploiting an outdated Australian and New Zealand approach to regional relations by providing ‘no strings attached’ loans to Pacific nations.
– Australia’s limited steps in renewing its Pacific relationships are unlikely to build mutually beneficial partnerships and counter Chinese influence.

After the 2016 Pacific Islands Forum (PIF) in Micronesia, Prime Minister Malcolm Turnbull announced that Australia was committed to a “step change” in its engagement in the Pacific region, guided by a new Pacific strategy. Australia’s renewed focus on the region is finally kicking into action, with Australia announcing a new Pacific Labour Scheme at the PIF this year. The scheme is expected to be open to citizens of Nauru, Kiribati and Tuvalu to work in Australian regional areas for up to three years.

This new approach may have come too little too late. Australia has long relied on maternal relations based in historical attitudes and assumed regional dominance. But the emergence of China as a regional player is changing the equation. Beijing’s aid strategy may undercut Canberra’s traditional hegemony, and not necessarily to the benefit of its Pacific recipients.

Former Australian Prime Minister John Howard once termed the Pacific “our patch” and consecutive governments have taken the same approach—they have assumed that the Pacific was inherently dependent on Australia, to a lesser extent New Zealand. This way of thinking developed following colonialism in the region by European powers, Australia and New Zealand, which left smaller nations reliant on them for trade and governance.

Five decades after decolonisation, many Pacific nations still depend on Australia and New Zealand to guide their development and governance. Canberra and Wellington have provided massive amounts of foreign aid (on which many nations still rely) and have helped to maintain domestic stability through military assistance and capacity building. Examples of the latter include Australia’s intervention in East Timor at the turn of the century, the provision of military assistance to Papua New Guinea during the Bougainville Civil War, and the Regional Assistance Mission to the Solomon Islands, an Australian-led multinational peacekeeping force deployed to the Solomon Islands from 2003 until June 2017.

While Australia has pursued the same development and stability strategies in the Pacific for years, new players have emerged offering more lucrative aid packages and support in response to new issues like climate change.

THE CONFUSING POLITICS OF AID China has become a major player in the Pacific, seeing an opportunity to counter the limited power of Australia and New Zealand and fill the vacuum of major players like the US and EU. Beijing has broken ground through ‘chequebook diplomacy’—using financial support to win over local officials—to further its own economic and strategic interests both in the Pacific and elsewhere.

China has provided close to $1.78 billion in aid to the Pacific in the last decade, second only to Australia’s substantially larger regional aid contribution of $7.7 billion. Two-way trade between China and the islands reached close to $7.5 billion in 2015, and in 2017 China even supplied Samoa with 20 cars to transport regional leaders during the PIF. It has also persuaded Fiji, which has tended to be more suspicious of its relations with Australia and New Zealand, to join Beijing’s transcontinental infrastructure plan One Belt One Road Initiative, which holds a lucrative $900 billion in projects.

Australia is beginning to take a more multifaceted regional approach in countering China. It promised $50 million to PIF in 2016 to assist combatting climate change, a major threat to the survival of several Pacific nations. In 2017, it concluded the PACER Plus trade cooperation agreement, a deal between Australia, New Zealand and members of the Pacific Islands Forum, to promote more mutually beneficial economic relations. Turnbull’s Pacific Labour Scheme announcement at the 2017 PIF was a further positive step towards better relations and reciprocity between the Pacific and Australia.

Canberra has also started to be more open about countering Chinese influence in the region. Earlier this year, Canberra rejected an internet submarine cable connecting the Solomon Islands and Sydney on national security grounds after the Solomon Islands announced state-owned Chinese firm Huawei would be contracted to construct it.

Australia’s reengagement strategy benefits from regional allies, namely New Zealand, the US and France, which possess much more historical influence in the Pacific than China. These nations have active foreign aid programs that assist with stability and improving domestic institutions. China, on the other hand, is almost wholly reliant on the influence of short-term political gains through finance. 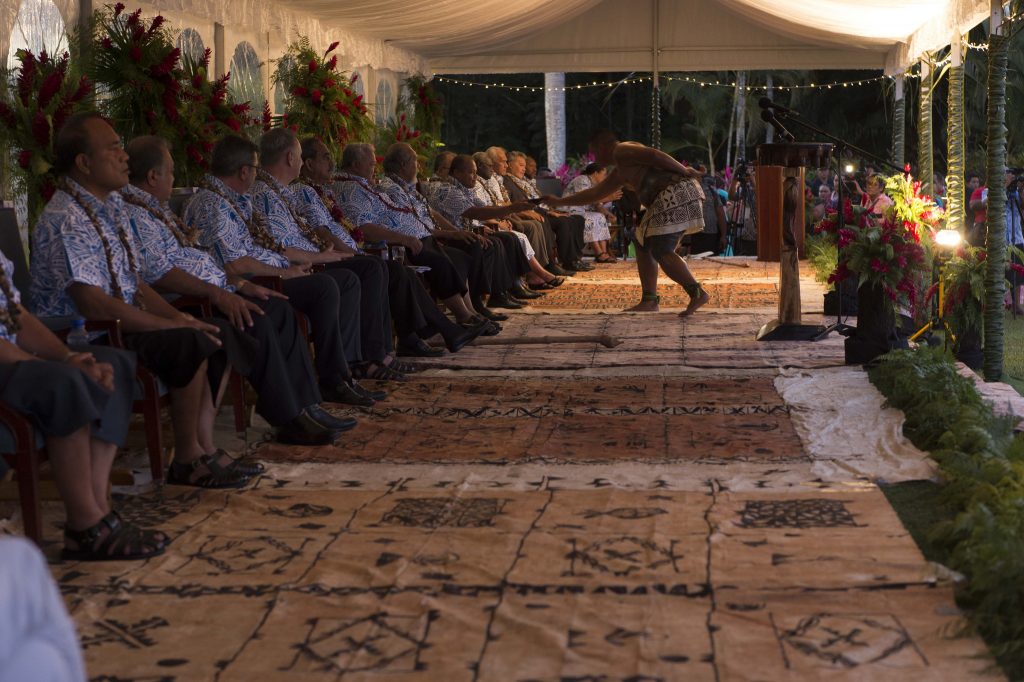 Chinese aid often comes ‘no strings attached’ and focuses on funding key infrastructure. This is more attractive than Australian aid, which is subject to strict government criteria such as ‘good governance’ measures and targets political and economic improvement. Chinese loans come with extended grace periods for repayments and low interest rates, and are tailored in a way that makes them mutually beneficial for Chinese companies seeking market access in Pacific states. While these loans and the projects are no doubt positive for the region, they are also much more visible—and considered less condescending—than Australia’s heavily controlled focus on institutional assistance. China’s approach to aid may, therefore, damage the perception of Australia’s development assistance and its wider reputation, particularly as neighbouring countries grow closer to Beijing and warm to its influence.

However, Chinese aid and development assistance comes at a price. Debt distress, poor management and corruption are common in the region and the availability of extra liquidity with few conditions could have an incendiary effect. For instance, Tonga, a beneficiary of Chinese aid, has an external debt to China that makes up close to half of its GDP. Once repayments to China commence in 2018, the International Monetary Fund suggests that the country will be at an extremely high risk of debt distress. Although China and its hefty aid packages have been welcomed by many, smaller nations like Tonga may be stuck paying off these loans in a never-ending cycle of debt dependency.

Prime Minister Turnbull’s pivot towards the Pacific comes at a crucial time. Australia has long sought to balance its position as the region’s leader and simultaneously its equal partner, using Canberra’s extensive aid program as the centrepiece of its partnership. However, this rigid, dependency-type approach is unlikely to help counter the influence gained from China’s burgeoning war chest of regional aid, and serves to further shift nations towards China. Beijing’s influence could grow further as China takes strides to combat climate change, outshining Australia in an area of vital importance to the Pacific but one in which Australia has not been seen as a leader. This risk also flows through to areas like economic development.

For now, the Pacific still relies heavily on Australia and its development assistance. But if Australia’s new pivot against the Chinese push in the region is to succeed, Canberra will need to recognise it also relies on the Pacific.