As PM Abe pushes for constitutional reforms to let Japan rearm, what are Tokyo’s true intentions?

It is widely accepted that Japan has become a responsible and integral global stakeholder. But the recent encroachment of right-wing politics brings into question the intentions that belie constitutional amendments allowing the projection of military force.

Over the past seven decades, Japan has transformed itself from an expansionist imperial power into a responsible international stakeholder that is seen as integral to the global security and economic order. Indeed, until being recently superseded by China, Japan was the world’s second largest economy – despite having experienced more than two decades of economic recession. Further, under the Yoshida Doctrine, it had steadfastly refused to develop offensive military capabilities despite its immense wealth – an international anomaly for such a large power. This despite repeated calls from Washington to serve as a regional bulwark against communism, and now a seemingly revisionist China.

Yet recent political developments in Japan – the loosening of restrictions on military acquisitions, enabling its armed forces to participate in combat missions, and a growing right-wing presence in Cabinet – give credence to doubts surrounding Japan’s ‘peaceful’ intentions. Memories of Japan’s wartime atrocities remain, giving rise to certain questions – is Japan really committed to the pursuit of regional peace, or does it have more insidious intentions?

Since the imposition of Article 9 of the Japanese Constitution in the aftermath of World War II, Japan has not been allowed to maintain an armed force. While this was creatively reinterpreted to allow Japan to retain a minimal deterrent through a Self-Defense Force, Japan still actively limits its military and lacks the capability to significantly project power beyond its immediate littoral reaches. Indeed, until recently, Tokyo had refused to acquire capabilities that would allow it to refuel and replenish its naval and air assets at sea and in the air. As an example, when Japan acquired the F-4E fighter aircraft – a long-range strategic bomber – it chose to remove the platform’s bombing and long-range capabilities.

In practice, Japan has until recently limited itself to peacekeeping, resupply operations and the provision of financial support to international campaigns – refusing to participate in global interventions.

Further, Japanese policymakers have self-restricted the export of military technology to other countries, imposing significant costs on the country’s economy and stunting the local arms industry. Finally, it has repeatedly apologised for its wartime actions and made an effort to contribute both in terms of leadership and finance towards the overall health of the region through its participation in multilateral initiatives such as the Asian Development Bank. Such is the effective ‘rehabilitation’ of Japan that, with the exception of China, the entire Asia-Pacific region – which was once under the yoke of Japanese imperial colonialism – has not batted an eyelid despite Japanese economic success and the recent relaxing of restrictions on its defence posture. It has also hitherto resisted the urge to develop nuclear weapons, despite being sandwiched between three nuclear-weapon states – the US, China and North Korea.

This ‘lack’ of an assertive military posture, while anomalous, forms a new normal in international relations. Therein lies the problem – the expectation that Japan will remain a pacifist power failing to match up to the reality that Japan is rearming.

A RETURN TO ARMS 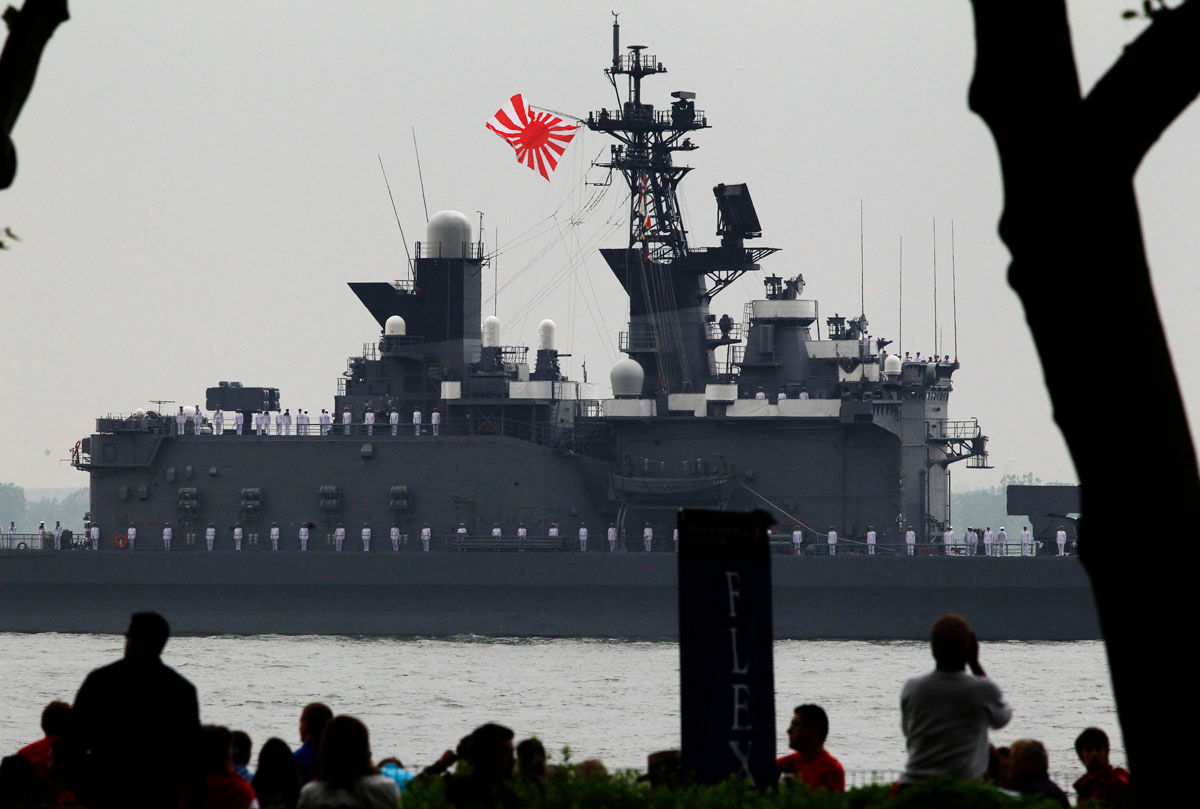 The recent loosening of restrictions on Japanese arms exports serves two important functions. First, it will allow Japan to partake in joint weapons development and production when it serves international peace and Japan’s security. Considering recent American and Japanese rhetoric on how China’s rise and assertive actions are a threat to international stability, the definition of international peace has deliberately been left vague so as to allow for Japan to partake in activities that would serve to balance against, and diminish Chinese power – all while maintaining a front of altruism and innocence.

Further, considering Washington’s enthusiasm to get Japan to share its part of the regional security burden since WWII, it is likely that the US will be the most ardent supporter, contributor, sponsor, and defender of this move – possibly exacerbating anxieties over a regional balance of power.

A RESURGENT RIGHT-WING IN NATIONAL POLITICS

Compounding regional concerns over a militarily re-ascendant Japan are the threats of the Japanese political executive being intimately linked to hardline right-wing organisations intent on historical revisionism. While Japan remains a robust democracy, it is these very democratic processes that have brought to power hardline elements. Prime Minister Shinzo Abe and 15 of his 19 Cabinet ministers are prominent, card-carrying members of the Nippon Kaigi – a nationalist organisation openly devoted to historical revisionism and right-wing ideology. PM Abe is in turn Nippon Kaigi’s special advisor to the National Diet.

Nippon Kaigi believes Japan was not guilty for any of its wartime actions and promotes revising the constitution entirely. Instead, it believes Japan should be applauded for liberating much of East Asia from Western colonial powers during World War II. Further, the organisation believes a revisionist view of history should be the only curriculum taught in all Japanese schools, rather than one that is continually apologetic and emasculating. That the Abe administration chooses to deny Japanese wartime aggression – while Germany has completely distanced itself from its Nazi legacy – casts doubt over the continued peaceful intentions of the democratically-elected leaders of Japan.

Further, viewed in the context of loosening arms export restrictions, cheapening arms acquisitions for the JSDF, and the quiet boosting of Japanese Coast Guard capabilities, Japan might be seen by its neighbours as harbouring intentions of returning to its imperial past and possibly imposing its will on the region as a whole. To the neighbouring Chinese polity, it matters little whether Abe truly intends to loosen restrictions to allow a normalised Japan to be a responsible stakeholder in international politics rather than pursue nationalist and insidious policy outcomes. Indeed, as much as the world – and Japan – fears the ascendancy of an authoritarian China under the Communist Party, the region has an equal and valid right to fear a Japan that is led by individuals so closely linked to all that is associated with its wartime suffering, under the guise of democratic representation and responsible state behaviour. These fears are already reflected in polling, with 65 per cent of Chinese and South Korean citizens seeing Japan in an unfavourable light, with a further 30 per cent of South Koreans viewing Japanese military build-up as a threat to regional stability. This is far ahead of fears over corresponding Chinese military modernisation or Sino-Taiwanese tensions at 16 per cent and 13 per cent, respectively.

Finally, the impetus to normalise Japan’s defence posture (read: rearm) is not necessarily confined to elite-level policymaking, despite widespread popular support for pacifism. Indeed, in a recent Pew Research Center poll, 96 per cent of Japanese surveyed viewed neighbouring China as a threat; a further 63 per cent deem apologies for Japan’s imperial past to be unnecessary. Considering that even the Komeito Party – a Buddhist-leaning party that espouses humanism and opposition to nuclear proliferation – helped the ruling Liberal Democratic Party push through a bill loosening restrictions on arms exports, the question that should be asked is not if Japan rearms, but what it’s intentions will be when it does. 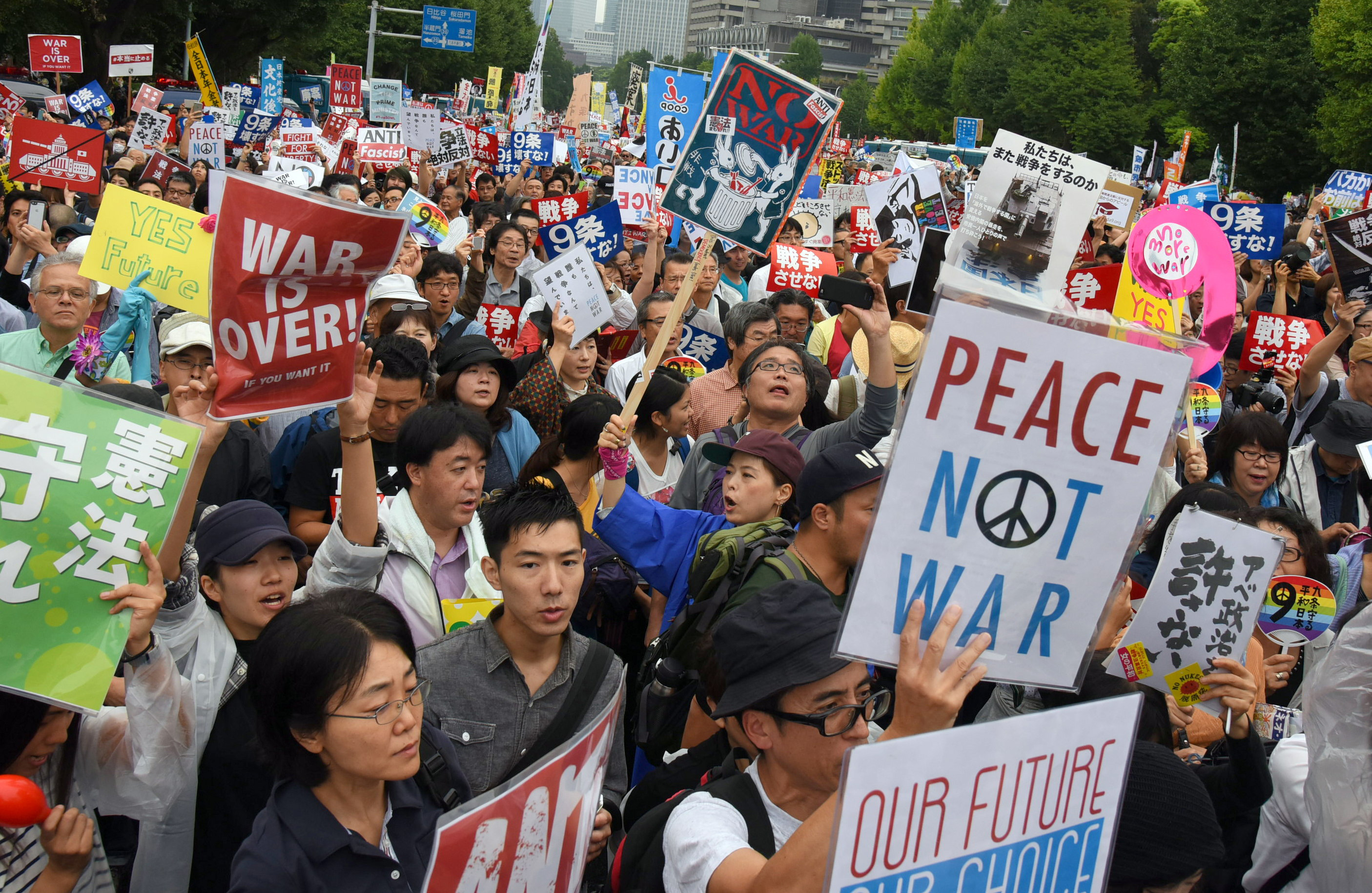 There are, however, some caveats to this doom-and-gloom portrayal of Japanese rearmament.

Japan’s defence spending has been increasing for four consecutive years, and is projected to do so until 2018. Yet, while the 2016-2017 defence budget will be Japan’s largest since WWII, it represents less than a fifth of Chinese military spending. Chinese defence spending is also increasing by double-digit percentages compared to Japan’s 2.2 to 2.8 per cent – meaning Japan is set to fall further behind. In comparison to South Korea’s defence expenditure per capita – which is $680 – Japanese defence spending per capita (at $330) is relatively restrained.

Second, it relies heavily upon the US nuclear umbrella to balance against regional nuclear powers. Choosing otherwise – that is, to eventually pursue nuclear armaments – would likely alienate Japan from the region. Further, despite the perception that technologically-advanced and inclined Japan will find it easy to acquire nuclear technology, this is not the case. It is more than likely that Japan will have to spend vast amounts of money on acquiring and enriching uranium; it will also have to create a viable means of delivering said nuclear weapons. Not only does Japan lack in technical expertise, but it will also find itself at odds with its people, the rest of the region, and Washington.

Finally, it must be noted that the Japanese populace is overwhelmingly against militarisation – with over 75 per cent believing that the primary role of the JSDF is to provide for disaster relief. Barring any sort of existential threat to national survival, it is hard to conceive of any political organisation – right-wing or otherwise – being able to encourage and accrue enough political capital and will to spur popular support for military expansion and overt power projection.

Why has Japan chosen to reinterpret its constitution now, and not in the past when the ruling elites had even greater parliamentary support? Does a right-wing religious organisation have undue influence over the formulation of Japanese foreign policy? That Japan will rearm and once again embark on autarkic, imperial conquest is not guaranteed – nor does this suggest it. Japan has accrued significant political capital and goodwill since the end of WWII and is viewed as a responsible stakeholder in international politics. Therefore, suggesting that Japan has malicious intentions is undoubtedly an unpopular perspective. However, the hard questions must be asked as they have serious implications for regional stability – which is in turn of consequence to international stability given the importance of the Asia-Pacific to global wealth output.