The Social Democratic Party (SPD) of Germany will hold a party conference today to elect a new leader. The conference 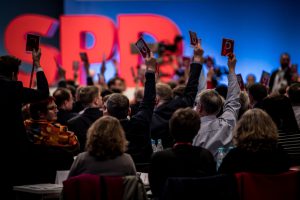 The Social Democratic Party (SPD) of Germany will hold a party conference today to elect a new leader.

The conference comes three days after its own member, Olaf Scholz, overtook Chancellorship from Angela Merkel marking the end of her 16-year leadership. Co-leader of the conference, Norbert Walter-Borjans, has denied running for re-election for the SPD chairmanship and called on younger people to take over the future of the party. Walter-Borjans Co-Chairwoman, Saskia Esken, wished him well in his decision as she will remain active in party leadership moving forward.

In October, Esken announced that she would run together with Lars Klingbel for the leadership position. Klingbeil is currently the SPD’s secretary-general and managed the party’s victorious federal election campaign. Klingbeil represents the moderate SPD faction to which Scholz also belongs while Esken is part of the more leftist wing of the party.

Expect the election to run smoothly, unless there are unknown challengers that will announce their candidacy on the day of. The nomination of Esken and Klingbeil marks a new era for SPD in German politics and stands in contrast to other German parties.