As divisions emerge over improving relations with the West, Tehran will become increasingly polarised.

The nuclear deal struck between Iran and the P5+1 in mid-2015 will be a central issue on the Iranian political circuit in 2016. The implementation of the deal will be met by political wrangling and present significant political challenges as moderates and conservatives become increasingly polarised over this crucial policy issue.

The agreement will empower President Rouhani’s administration and the moderate politicians that support it, particularly as Iranians begin to feel the effects of an expanding economy and increased standing in the international community. This will provide Rouhani with a powerful and persuasive platform from which to push back against opponents of the deal.

The agreement will draw scepticism and in some cases downright hostility from many conservative politicians who will attempt to embrace the historical distrust of the West harboured by many Iranians in order to disrupt the implementation of the accord.

Expect Iran’s Revolutionary Guard Corps (IRGC), a powerful and conservative military and security organisation responsible for protecting the regime, to be at the vanguard of those challenging the implementation of the nuclear deal in 2016. The IRGC has grown into the most powerful economic actor in the country in the past decade, filling the hole left by sanctions by establishing large companies that are often operated through private patronage networks in order to avoid sanctions. These companies pervade the Iranian economy: from construction to energy, telecommunications to banking. The IRGC has benefitted from the award of substantial government contracts, sometimes under obscure circumstances, and has benefitted from a close relationship with both the Supreme Leader and the conservative Ahmadinejad administration.

Any moves to liberalise the Iranian economy and reform foreign investment laws will threaten the IRGC’s dominant role in Iranian society. Therefore expect conservative elements of the Iranian political scene to put up a fight, not only to prevent the full implementation of the nuclear deal but also to resist the general trend of warming relations with the West and opening up of Iranian markets.

Importantly, unlike many other Middle Eastern countries, Iran has a relatively vibrant political scene with multiple actors that have divergent interests, although this is not without its limits. In this sense ‘Iran’ is not a unitary actor, but one with different factions vying for influence, much like the political jockeying that occurs in the West. 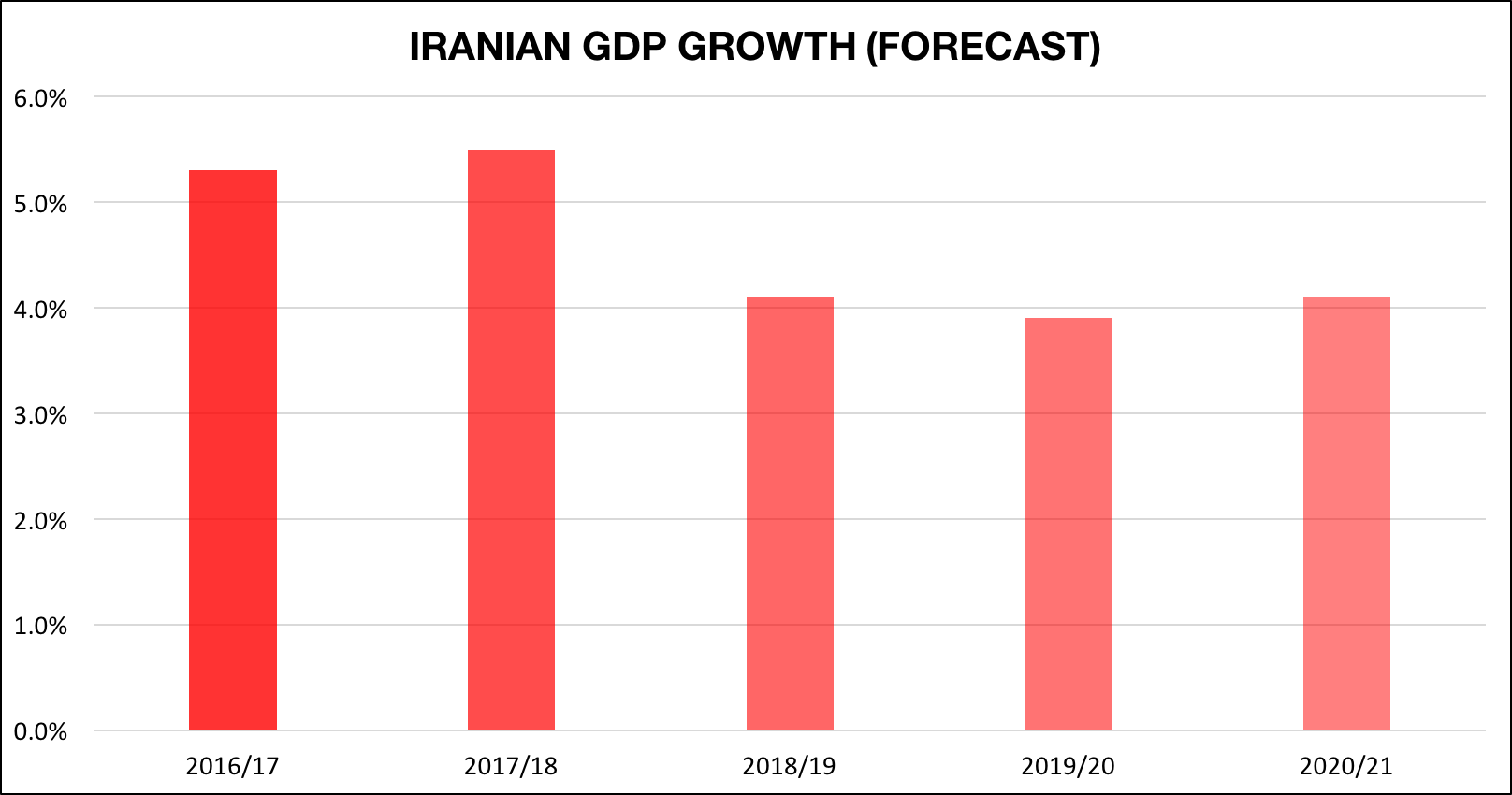 The outlook for the Iranian economy has improved significantly over the past 12 months. Assuming the nuclear deal is fully implemented, as appears to be the case, Iran looks set to enjoy sanctions relief with a resultant increase in trade and gradual access to the international financial system. This will provide a welcome reprieve from the economic isolation that it has endured over the past decade. Forecasts predict a marked uptick in economic activity, with growth expected to top 5% of GDP in 2016-17.

The lifting of economic sanctions will also signal the resumption of large-scale oil and natural gas exports from Iran, which holds the fourth and second largest global reserves respectively. Prior to the nuclear deal, Iran’s oil production was hovering around the 3 million barrels-a-day mark, with just over a third of that figure exported. Iranian authorities have now stated they are ready to increase production to 4 million barrels a day by mid-2016. However, noting the relatively poor state of Iran’s infrastructure and the lead-time required to get plugged wells flowing again, market analysts have voiced doubts whether this is feasible within such a short period. Despite this, Iran has been stockpiling huge reserves of crude, using tankers as floating storage in anticipation of the lifting of sanctions. The lifting of sanctions will have a noticeable impact on the already over-supplied oil markets.

Although historically low oil prices will dampen expectations for economic growth in 2016, the resumption of large-scale exports will be a boon for a recovering Iranian economy

Away from the oil markets, the lifting of sanctions will bring opportunities to harness Iran’s young, well-educated population, particularly with the likely increase in foreign investment. Foreign capital and expertise are desperately needed to modernise Iran’s infrastructure and drive competitive advantages in sectors like car manufacturing, industry. Since the interim agreement on Iran’s nuclear program was reached in late 2013, Western trade delegations have been frequenting Tehran in anticipation of the lifting of sanctions. In September 2015, a large French delegation visited Tehran, including politicians and representatives from oil major Total, car manufacturer Peugeot and airline producer Airbus. If the composition of the French delegation is a sign of Iran’s potential international business partners, Iran’s economic prospects are positive.