COP22 climate talks, the US election and Venezuela’s government resumes talks with the opposition

(postponed due to Jakarta protests)

Indian and Japanese PMs meet to discuss defence and trade

Second round presidential elections in Moldova

Second round of presidential elections in Bulgaria

Border controls in Austria, Germany, Denmark, Sweden and Norway are extended for 3 months 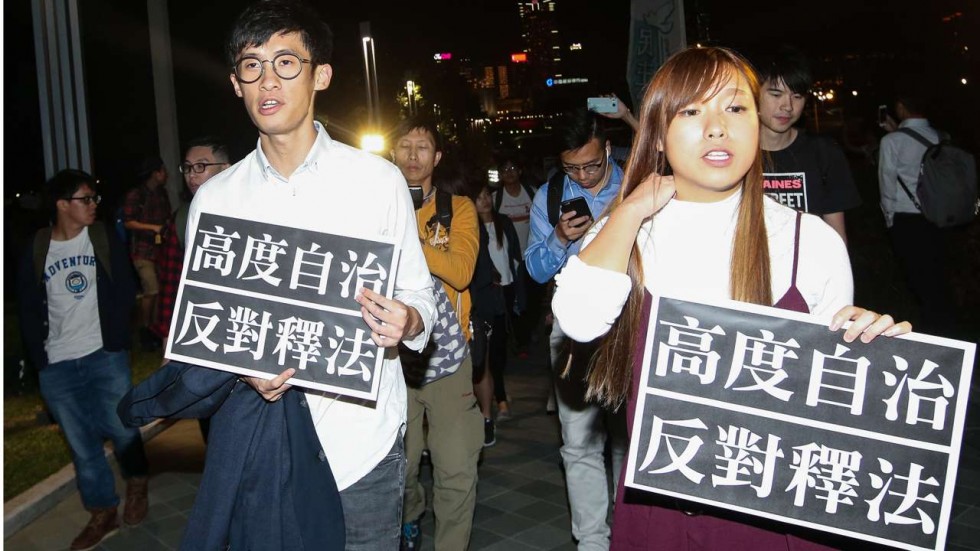 On Monday, China’s parliament – the National People’s Congress (NPC) – will decide whether to bar two pro-independence legislators from their seats on the Hong Kong Legislative Council.

Voted into office during the September elections, Sixtus Baggio Leung Chung-hang and Yau Wai-ching laced their oaths of office with anti-China profanities at the Council’s first meeting in October, and also displayed banners stating ‘Hong Kong is not China’. A Hong Kong court commenced hearings on Thursday to bar the pair from office on request from the city’s Beijing-backed government.

However, on the same day, the mainland NPC announced its intention to give its own interpretation of the provision in Hong Kong’s Basic Law that states lawmakers must swear allegiance to the territory as a part of China.

If Ms Yau and Mr Leung are barred from office by the NPC ruling, it is likely that by-elections for their seats will be held in the next six months. 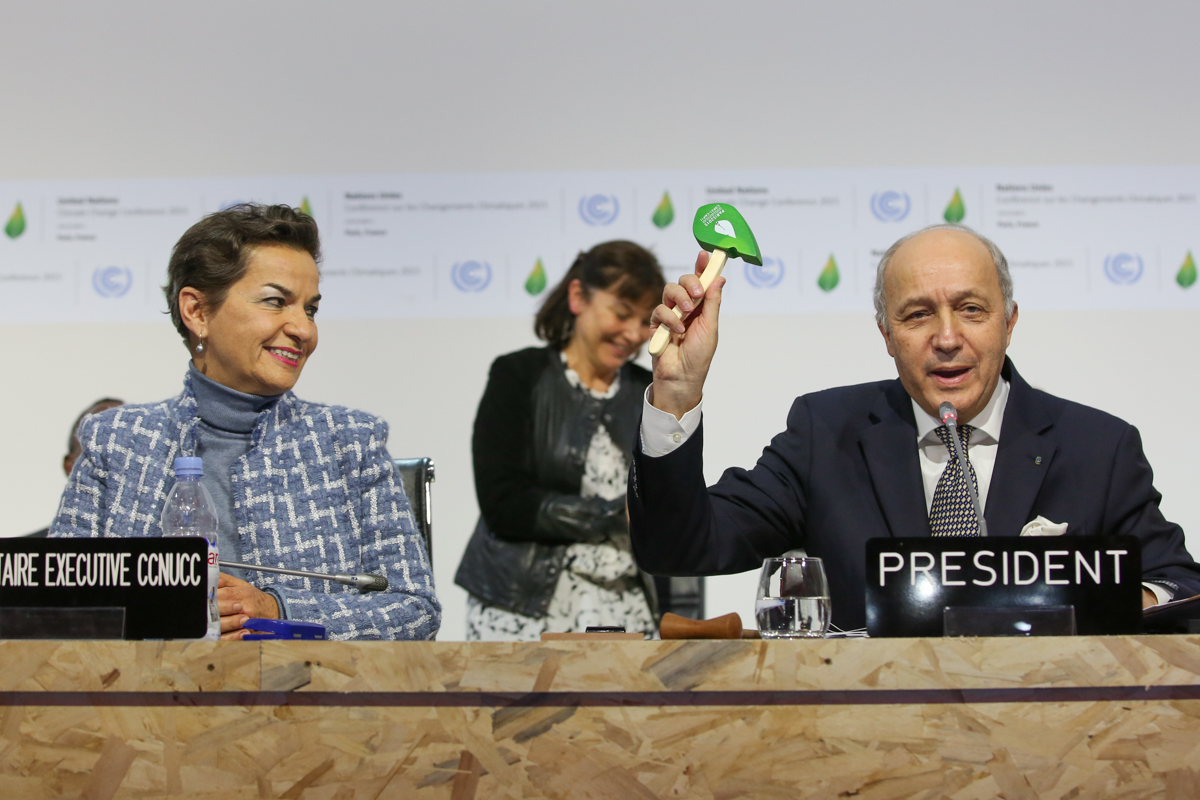 The 22nd UN Climate talks, labelled COP22, will begin in Marrakech on Monday. The first meeting of the Parties to the Paris Agreement will also be held alongside COP22 and will lay important groundwork for the treaty’s implementation.

On Saturday, countries will publicly debate their intended nationally determined contributions, which are their final climate change action plans. Delegates will also finalise global stocktake dates to assess progress periodically. These assessments play an important role in the ‘ratchet mechanism’ contained in the Paris Agreement, which aims to boost countries’ targets over time. Current goals fall short of achieving the ‘well below two degrees Celsius’ goal contained in the agreement.

Moroccan activists have planned country-wide demonstrations during the conference to attract international attention to economic, social, and environmental concerns in the country. Over the past week, protests against police and state mistreatment have escalated since a 31-year-old fish seller was crushed to death in a rubbish compactor while trying to retrieve confiscated fish last week.

The US Presidential election may distract from the first week of the conference. Republican candidate Donald Trump has declared his intention to withdraw from the Paris Agreement if elected. As the world’s largest emitter of greenhouse gases, the sudden withdrawal of the United States would have a devastating effect on the goals of the Paris Agreement. 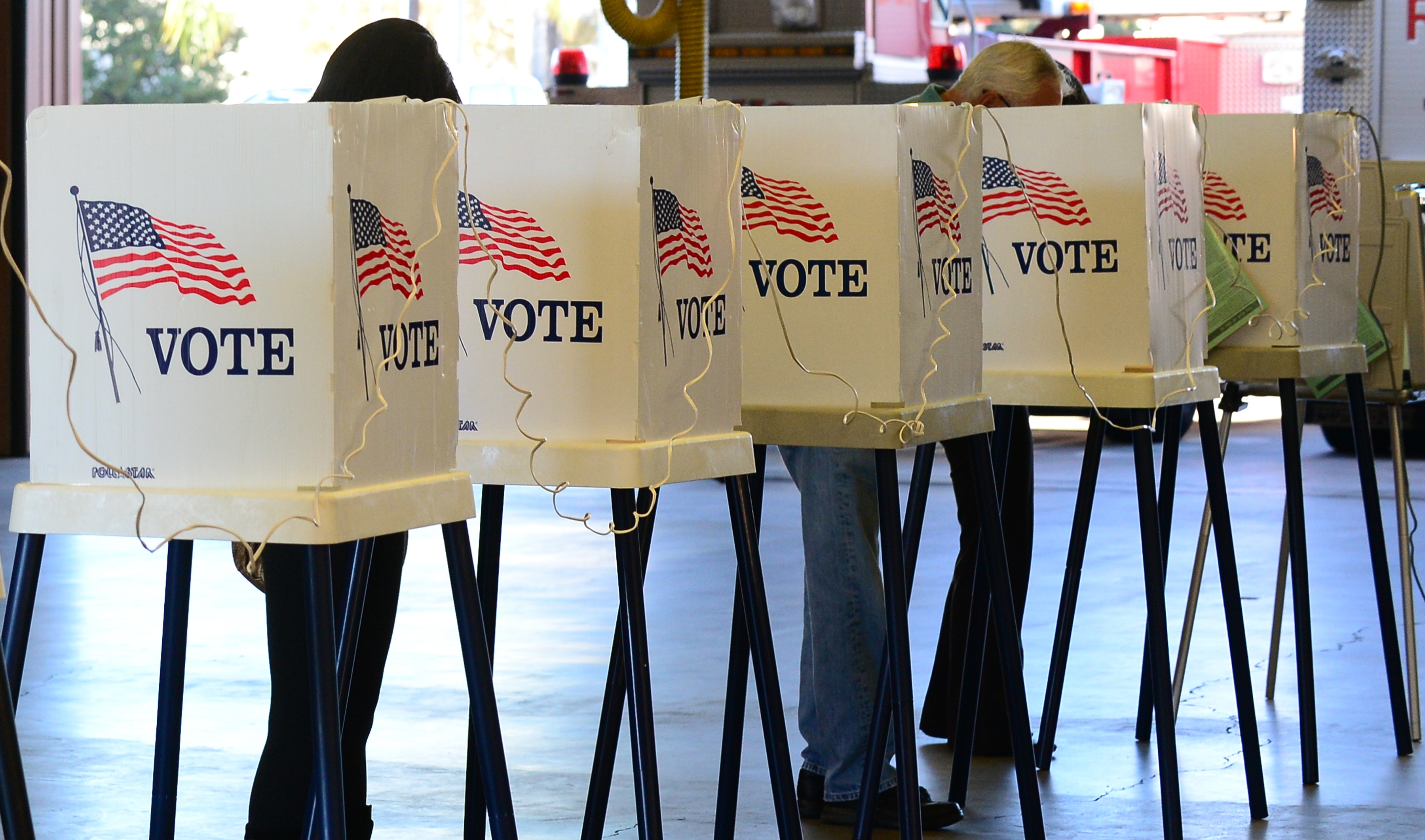 The United States will hold its headline-dominating election on Tuesday. Along with the presidency, all 435 seats in the House of Representatives are up for grabs, as well as 34 of the 100 seats in the Senate. Results of the presidential election are expected to be called sometime on Wednesday evening or early Thursday morning US Eastern Time.

Traditionally, US elections are won in battleground states – states that hold a high proportion of swing voters. The key states for both candidates to win on Tuesday are Florida, Nevada and Ohio.

Polls indicate Mrs Clinton may very well have a slight edge over Mr Trump in many of these states, although the Republican candidate has reduced her lead over the past two weeks. Expect a relatively tight, drama-filled Election Day, but ultimately – barring any unforeseen developments – a victory for Hillary Clinton.

The deep polarisation that has dogged this campaign has raised concerns about the possibility of election-related violence in the immediate aftermath of Tuesday’s vote. Donald Trump’s refusal to commit to accepting the election’s results, combined with claims the system is ‘rigged’, and allegations of Russian hacking, make for a potentially combustible situation.

The entire House of Representatives and one-third of Senate seats are also up for grabs on Tuesday. While the Republicans are expected to maintain control of the House, the Democrats may very well clinch the five seats necessary to form a majority in the Senate. If this is the case, the Democrats will gain the ability to confirm (or block) the next president’s Supreme Court nominee – a substantial prize.

PROTESTS IN EGYPT OVER ECONOMIC REFORMS 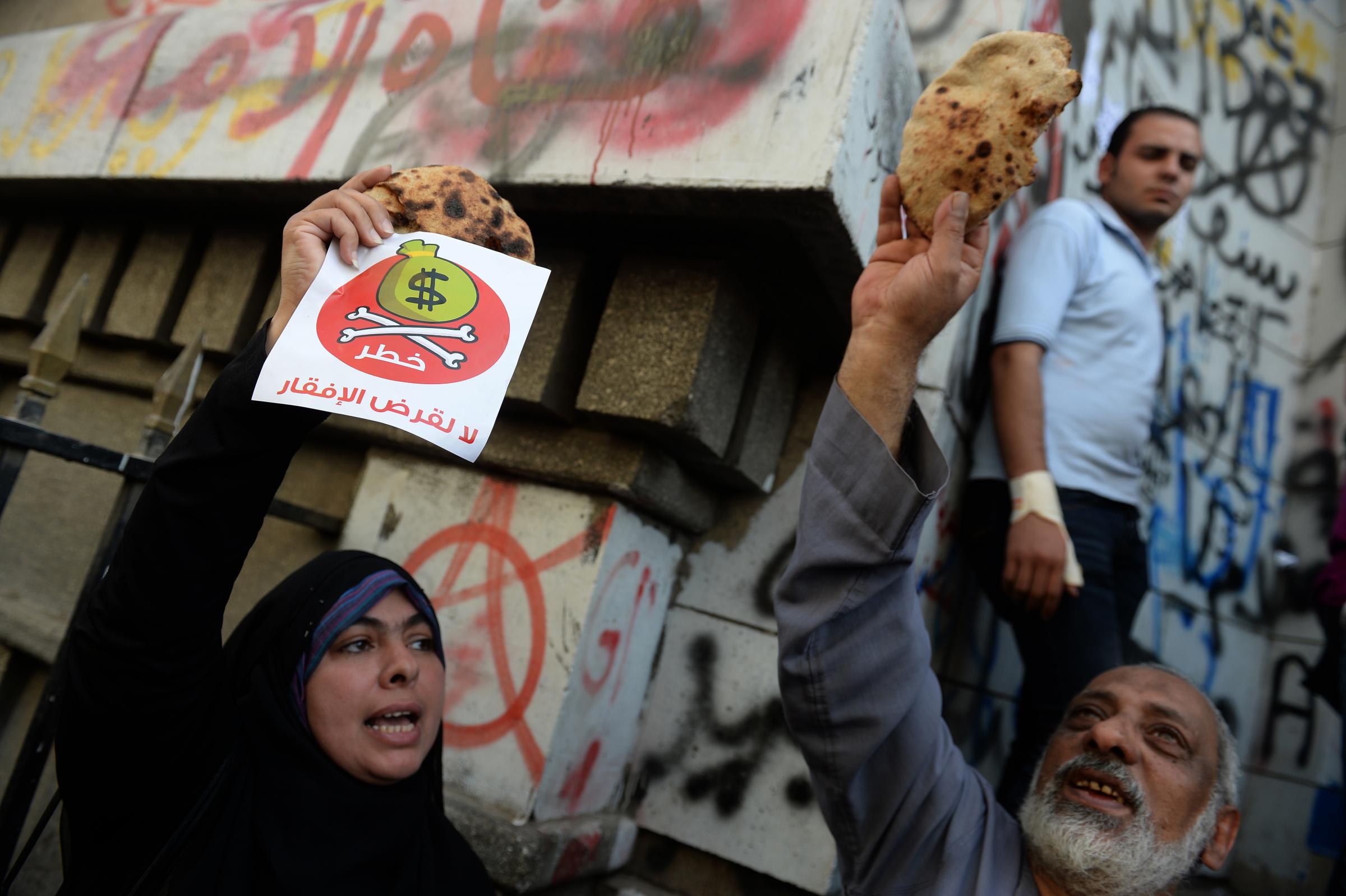 A group calling itself the Ghalaba Movement (‘Movement of the Marginalised’) is planning to hold a mass demonstrations in Egypt on Friday in response to recent economic reforms.

The protests come a week after Egypt’s Central Bank announced the floating of the country’s currency, partly in response to a sharp rise in the price of staples such as rice, bread and sugar. Cairo has also come under pressure from the IMF to institute economic reforms – including the lifting of subsidies and liberalisation of the pound – in return for a much-needed $12 billion loan.

Over the past weeks, the country’s security forces have arrested individuals accused of organising the protests via social media. Messages on the group’s Facebook page called for the demonstrations “to overthrow the corrupt regime and liberate the country from those who have betrayed and humiliated the Egyptian people”.

Major opposition groups, including the liberal al-Dostour Party, have rejected the movement, casting doubt about whether Friday’s protests will go ahead as planned.

Meanwhile, on Tuesday an Egyptian court will resume hearing the government’s appeal against a decision that nullified the transfer of two Red Sea islands to Saudi Arabia – another controversial decision. President Nicolas Maduro’s government is scheduled to resume Vatican-sponsored talks with the country’s opposition on Friday. The dialogue aims to bring an end to months of political stalemate that have left the once prosperous South American nation in economic ruin.

Last week, the two sides agreed to a raft of confidence-building concessions, including the release of five opposition members from prison in return for the cancellation of anti-government demonstrations. These developments offer a glimmer of hope for a country mired in a seemingly intractable political crisis.

However, the opposition coalition, the MDU, is divided over whether to pursue further negotiations, with some elements claiming the government is only engaging in the process to stall plans for a recall referendum and disrupt the opposition’s momentum.

The government is also divided. Former parliamentary speaker Diosdado Cabello appears to be taking a hardline on the talks and has been unwilling to compromise with the opposition coalition, despite Maduro’s ostensible willingness to hold the dialogue.

Despite the recent concessions, it appears unlikely the well-intentioned Papal delegation will be able to broker a solution to Venezuela’s woes in the coming week, or indeed anytime soon.

SECOND ROUND OF MOLDOVA’S ELECTION 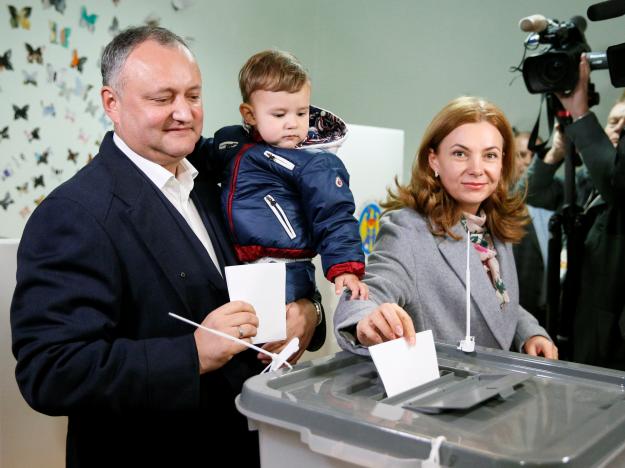 Moldovans will head to the polls for a second round of voting on Saturday in the country’s first direct presidential elections in twenty years. In the first voting round, pro-Russian candidate Igor Dodon narrowly missed out on a majority, claiming 48.5 per cent, with pro-Western challenger Maia Sandu lagging behind on 38.2 per cent.

The ex-Soviet country has been in a state of turmoil since $1 billion disappeared from the banking system in 2014. Street protests have flared in response, with the IMF and European Union suspending aid payments. The embezzlement was traced to former Prime Minister Vlad Filat, but there is broad public suspicion of pro-EU elite involvement.

Riding on these suspicions, and if triumphant at the polls, Dodon says he will hold a referendum to remove Moldova from a trade and political agreement with the EU signed in 2014. Instead, he intends to join the Russian-led Eurasian Customs Union. Moscow is predictably eager to consolidate its power over the Eastern Europe state, and already backs Moldova’s break-away region Transnistria.

Less than 50 per cent of eligible voters participated in the first round of voting. Maia Sandu, an ex-World Bank economist and former education minister, has blamed the low turn-out on authorities ‘impeding’ young people from voting.